Use microprocessors to build robotics for wide array of purposes

What is Physical Computing?

Physical Computing is an approach to learning how humans communicate through computers that starts with how humans express themselves physically and in their physical environment. The design and construction of physical systems uses a mix of hardware and software. In the most basic terms, physical computing is a creative framework for understanding human beings' relationship to the digital world. It gives birth to virtual reality, augmented reality, artificial intelligence, tangible user interfaces, robotics and even cars. These complex systems often start off using very simple ciruits. This can be accomplished through the use of microcontrollers, sensors, electro-mechanical devices such as motors, servos, lighting and other hardware. These devices are what power our digital world.

"We young ones have a perfect right to take toys and make them into philosophy, in as much as nowadays we are turning philosophy into toys."

Physical Computing: Sensing and Controlling the Physical World with Computers B Dan O'Sullivan and Tom Igoe 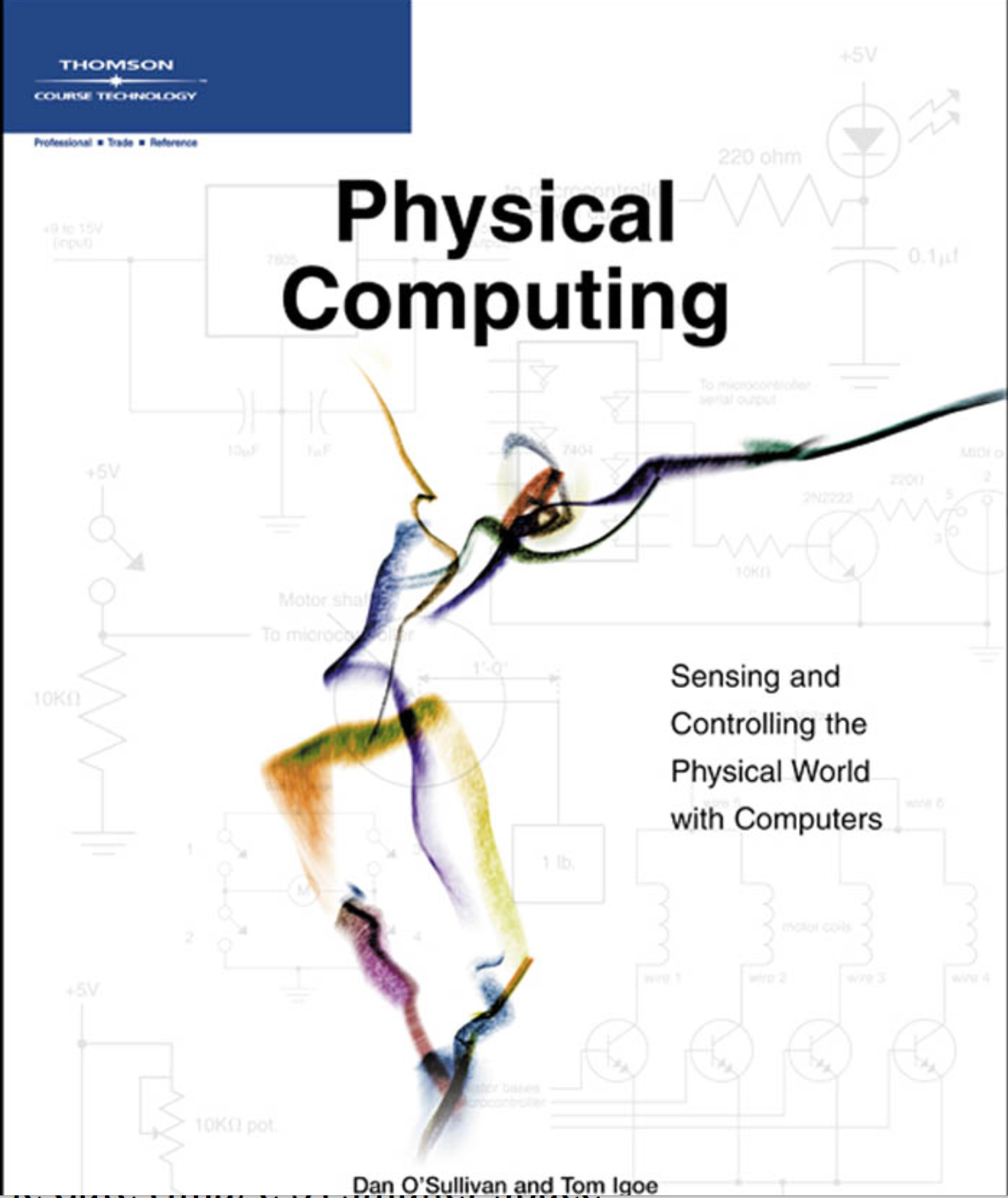 This book contains instructions, schematics and computer programs for use in experimental computer interface projects.

Exploratorium is a museum located in San Francisco that has been described as "a mad scientist's penny arcade, a scientific funhouse and an experimental laboratory all rolled into one" (Allison McCarthy's "A First Look at the New Exploratorium" in 7x7 Magazine, 2013). Not only does the website give basic information of the museum, but it also has dozens of links on engaging the imagination, seeking exploration, play, discovery, clever websites articles, and activities.

Scott Snibbe is an interactive media artist, researcher and entrepreneur. "He is one of the first artists to work with projector-based interactivity, where a computer-controlled projection onto a wall or floor changes in response to people moving across its surface, with his well-known full-body interactive work Boundary Function (1998) premiering at Ars Electronica."

Text Rain (1999), a project done by artists Romy Achituv and Camille Utterback is an interactive installation in which participants use their bodies to lift and play with falling letters that do not really exist. The project is conducted with a projection screen, sensors and a physical IDE coding program.

IDEO is an international design and consulting firm located in Palo Alto, California in 1991. With locations in big cities all across the world, the company uses design thinking methodology to design products, services, environments, management consulting, organizational design and digital experiences. Started in 1991 by a merger of David Kelley Design, London-based Moggridge Associates and San Francisco's ID Two and Matrix Product Design.

Dance Dance Revolution (DDR) was music video game series produced by Japanese company Konami (starting in 1998). Players stand on a "dance platform" and hit colored arrows laid out in a cross with their feet to musical and visual cues. Players are judged by how well they time their dance to the patterns presented to them and are allowed to choose more music to play to if they receive a passing score. The dance stage contains pressure sensors for the detection of steps.

An example of a physical computing model  within scientific experiments is the Illustris project.

The Illustris project attempts to precisely simulate the evolution of the universe from Big Bang to the present day, 13.8 billion years later. The main simulator for this project was run on the Curie supercomputer at CEA (France) and the SuperMUC supercomputer at the Leibniz Computing Center (Germany).

School of Form is located in Poznań, Poland. This school offers a 3.5 year full-time design course, after which students obtain a Bachelors degree from the University of Social Sciences and Humanities (SWPS). The program combines project work and an education in the humanities. It "is open to everyone - tinkerers, analysts, computer programmers, people with a love for DIY - and will help you develop, add to, improve and utilize your skills and interests."