This is a guide to primary sources on Military History that can be found in Temple University's Special Collections Research Center (SCRC).

The SCRC holds a variety of primary sources on military history, in the form of manuscripts, personal papers, letters, diaries, news clippings and photographs, dating to the U.S. Civil War, Spanish-American War, both World Wars, the Korean conflict, and the Vietnam War.

The materials mostly document personal experiences and observations of war--servicemen, officer, and civilians--both at home and on the front lines.  The materials are also generally tied geographically to the Philadelphia region.

Discharge papers and reminiscences of service of Temple University's founder. ​

​Draft exemption documents, September 7th and 8th, 1863. Payment of $300.00 for a substitute, Thomas Edwards, to take his place in the draft.

Drummer, Company B, 55th Pennsylvania. Regiment. Correspondence regarding life in camp and battles

Company B, 16th Pennsylvania Cavalry. Letters to his family in Media, Pennsylvania. about his capture and imprisonment in Andersonville POW camp, where he died.

Confederate War Etchings:
30 original sketches drawn, etched and printed, in an edition of 200 sets for subscribers, by Dr. A.J. Volck, in Baltimore, during the early part of the Civil War. Caricatures generally sympathetic to the Confederate cause and critical of Northern conduct before and during the war.

97th Pennsylvania. Regiment Band. West Chester, Pennsylvania.  Account of encamping on Warsaw Island,  fleet of ships with General Sherman on board, with a long description of the fleet getting under way to Jacksonville in Florida.  Also tells Confederate prisoners boarding the ship on their way to New York.  Also pre-war entries recounting the run up to the war.

Soldier writes about his experiences in the war.

Account of the period before he sails for Europe until after he returns to America eight months later.

Germany Army. 110 photographic post cards written to his home about his activities in WWI.  Most of the photographic images are of military scenes.

Corporal, British Army, Military Foot Police. Contains a charge sheet for a soldier, Private C. Welsh of the 8th Battalion Canadian Expeditionary Forces, who was shot for desertion. Plant was one arresting officer and his diary contains further information on the case.

Headquarters 79th Division.  Soldier from Quakertown, Pennsylvania.  Records his first days as a soldier, then from the front lines in France where he drives officers to and from the Front and describes the dangers.  Also recollections of celebrating the Armistice, being reviewed by General Pershing and sailing for home.

Lieutenant, Company C, 103 Engineers.  Correspondence, mostly from France, to his family in Stroudsburg, Pennsylvania. Some on Jewish organization stationery.  Also, 5 letters to the same family from a Captain Howard Cahill.

Surveys filled out by students describing their service during the war; Including Infantry service in battle, nursing at the front or in training camps in the U.S., work at the Naval shipyard in Philadelphia. Also, letters to Russell Conwell and Laura Carnell from students in the war.

Several thousand U.S., English and French WW I posters in the collection.

In German, with translation, written by a woman and a Nazi sympathizer, recording her elation at German victories and superiority, while telling in detail the horrors of the war, the air raids over her head, the deprivations caused by the war.  She lived in Bonn. Her son lived in Oklahoma.

The bulk of the collection contains letters, V-mail, and telegrams addressed to Louise Fleisher in Philadelphia from her step-son Richard Fleisher and her son-in-law, David Dolowitz. The correspondence from Richard Fleisher was written during his service in the 80th Infantry Division. Correspondence written by David Dolowitz is primarily personal and concerned with Louise's health. Miscellaneous materials in the collection include copies of G.I. newspapers, newspaper clippings, and printed materials on the 80th Infantry Division; photographs of Richard Fleisher, Lieutenant General Horace L. McBride, Brigadier General James E. Wharton, General George Catlett Marshall and others; and two registration cards in German.

Lieutenant, Flotilla 18, U.S. Navy. Over 400 pieces of correspondence between two sailors and their families in Philadelphia.

Private citizen involved in the theft of nuclear secrets from the Manhattan Project.  Two related collections:

Correspondence and other materials.  Consists primarily of handwritten letters, postcards, V-mail, and telegrams sent by Halbert to his family living in Philadelphia.

Chronicles the travel of a young Jewish man in Europe and the Soviet Union.

A father of American holocaust studies.  Includes material from his post-war work with the U. S. Office of Military Government and the High Commission for Occupied Germany.

Worked for the War Production Board and Office of War Mobilization.

Gefreiter (Lance Corporal) in the Germany Army. More than 36 letters from Marx to Frau Adelheid Marx in Vienna.

Sergeant. Company C, 239th Construction Battalion. Letters to his family in Arnold, Pennsylvania, regarding his activities during World War II.

​Clippings and photographs documenting life in the city during the war. Organized by subject and names of individuals.​

Daily News WW II Series of letters and narratives from Philadelphia regional veterans of WW II used for a series of articles in the Daily News.  Published and unpublished contributions.

Files concerning support for the war effort at Temple, such as training classes, war bond sales, sympathy letters from Johnson to parents of students.

Director of Athletics for Temple.  Collections consists of incoming letters from students away in the war.

Over 100 Letters from three Wizmirski brothers to their family in Philadelphia.  Documents their experiences and activities in various parts of America and Europe.

The SCRC holds a collection of anti-war and pacifist periodicals, published by and for active service persons, dating from the Vietnam War period.  These materials are from our Contemporary Culture Collections. Click on the links to view the catalog record and request to view them in the SCRC Reading Room.

Jacksonville, North Carolina. By and for Marines from Camp Lejeune,

Chief of the Bureau of Equipment and Recruiting, U.S. Navy. Letters and memoranda,many to Admiral Joseph F. Green, on various matters of men and ships.

Unites States Marine.  Diary of service during the Korean War

See here for a blog post on World War II love letters in the SCRC. 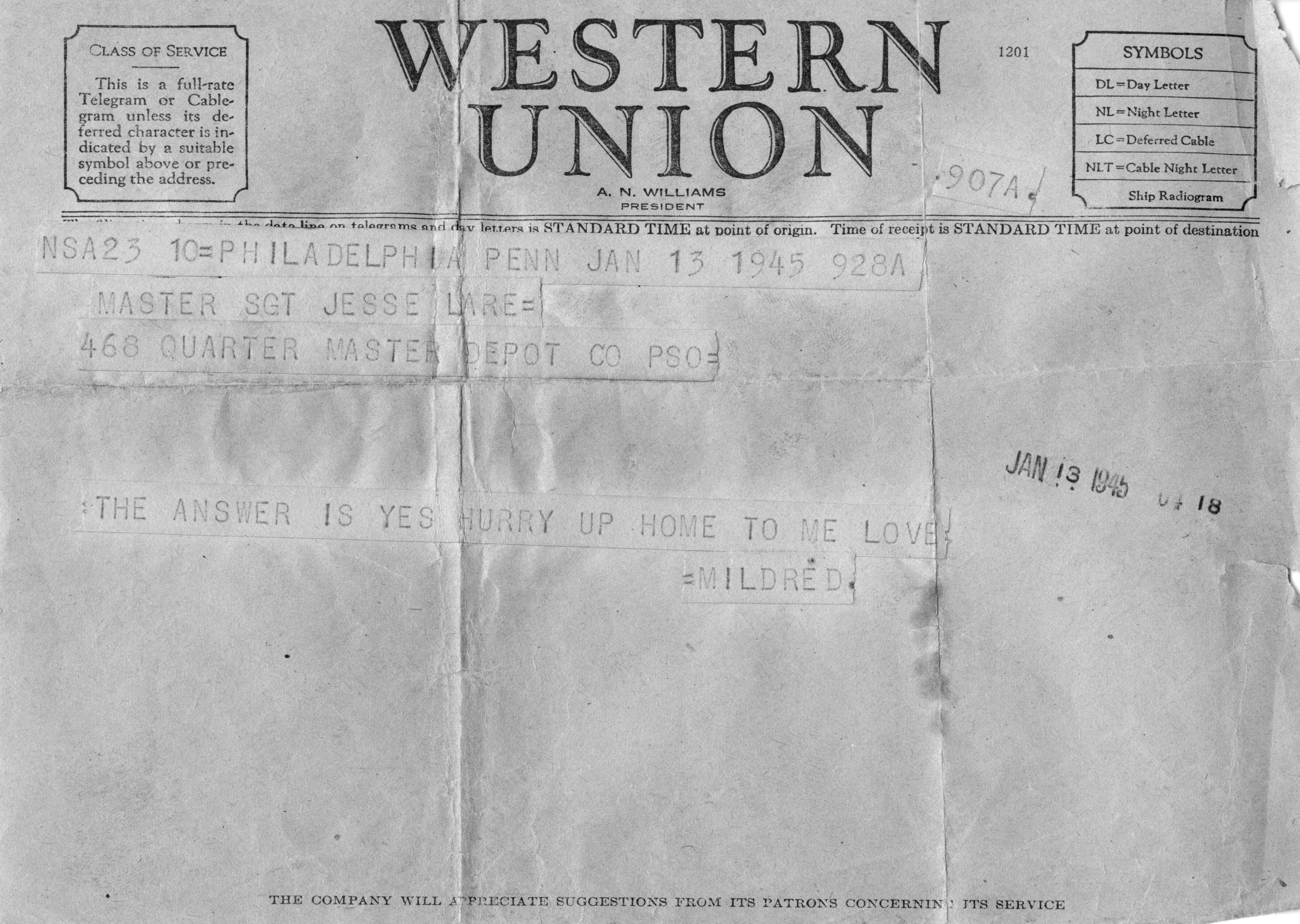